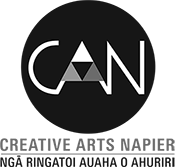 Roseanna has been interested in art since childhood, and is mostly self -taught.

She was involved with Folk & Decorative Art since 1984, when she attended classes while living in Auckland. On moving back to her hometown of Gisborne in 1986, she also studied Porcelain Painting.

In 1990 she moved to Hawkes Bay, and became involved in local craft co-ops selling her Folk Art and Porcelain. Roseanna began teaching Folk Art in 1993, and taught many enthusiastic painters in Hawke’s Bay, Gisborne, Wellington and Auckland. Roseanna also taught structured workshops in beginners watercolours in Wellington and Hawke’s Bay

A number of Roseanna’s naïve paintings and watercolours have been published as cards by Oxted Resources Ltd. In November 2003 she was elected an artist member of the N.Z. Academy of Fine Arts. Her work is many local and overseas collections. In recent years she has attended a number of workshops with international artists. Her main interests are naïve and contemporary art, watercolours and the painting and study of Byzantine icons.

Several years ago, Roseanna and her niece Kristy, spent a month travelling through Russia, Belarus and Poland, viewing the wonderful icons, churches, art and architecture. This was a life-long dream fulfilled.

And yes, her name is the same as the wine, which was named after her grandfather, Friedrich Wohnsiedler, one of New Zealand’s early winemakers.